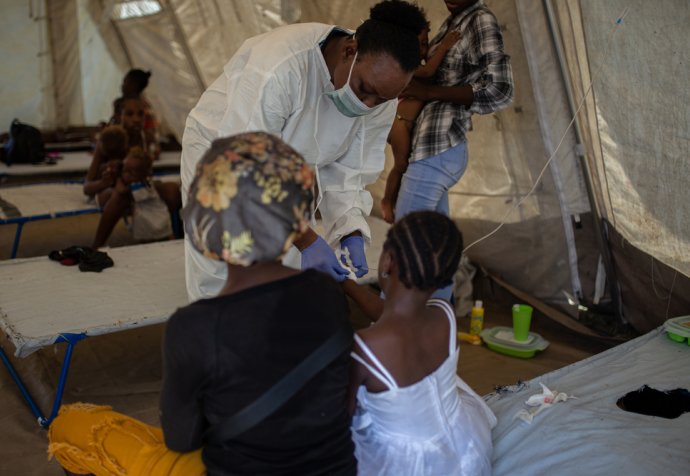 2022: Pictures from a year of humanitarian response 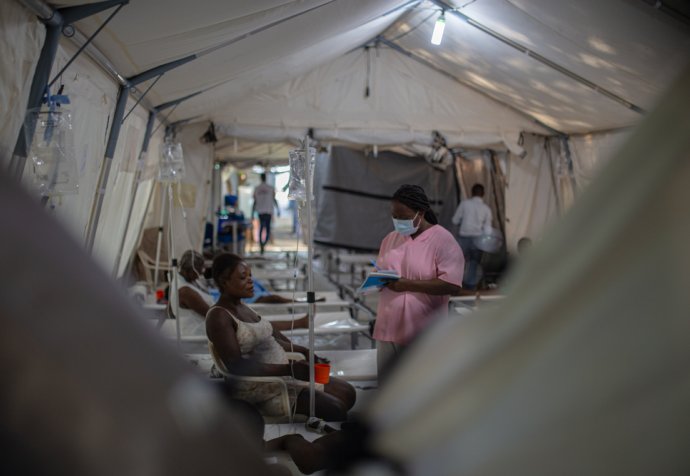 Haiti: MSF calls for an urgent intensification of efforts to fight against the cholera outbreak The latest in Haiti

On October 2 the Haiti government announced the resurgence of cholera, which was last recorded in 2019 at the end of an epidemic that caused the death of 10,000 people. Approximately 8,500 patients with cholera symptoms have been reported and around 100 have died. This resurgence of cholera is an illustration of an extremely degraded health context, which is in turn symptomatic of a catastrophic political, economic, security and health crisis.
MSF cholera treatment centres are overcrowded and have been seeing an average of 250 patients every day since late October, up from 150 in mid-October. The numbers are underestimated because of the difficulties of movement in Port-au-Prince, with the inaccessibility of certain neighbourhoods, and because of the overcrowding of the CTCs, which do not allow for the treatment of all patients.

Political instability, an earthquake in August 2021, a fuel crisis and chronic violence have pushed the healthcare system in Haiti to its limits as needs are on the rise.

The situation in Haiti

Haiti’s healthcare system remains precarious in the wake of natural disasters and ongoing political and economic crises. Ongoing disasters have led to Haiti becoming the poorest country in the Western Hemisphere.

The 7.2 magnitude earthquake in August 2021 is just one in a string of disasters to plague the country. In 2010, a magnitude 7.0 earthquake hit the capital, Port-au-Prince, resulting in thousands of deaths and leaving more than one million people homeless. The already damaged healthcare system was further weakened by the damage caused by Hurricane Matthew in 2016.

A high level of chronic violence, including armed clashes, robberies and kidnappings, affected people throughout the capital, Port-au-Prince. Entire neighbourhoods were under the control of different armed groups, with shifting territories. In July 2021 the president, Jovenel Moïse, was assassinated, causing additional political and economic turmoil in the country.

People in Haiti continue to face multiple barriers to healthcare amid ongoing political and economic crises. Violence is rife, particularly in the capital, Port-au-Prince, where gangs fight for territory and influence. In 2020, there were repeated strikes and staffing shortages in public health facilities due to attacks on health workers, non-payment of wages and the risks of COVID-19.

Our activities in Haiti

MSF teams have been providing medical care in Haiti for more than 30 years and currently run eight projects throughout the country, in the capital Port-au-Prince as well as the South and Artibonite departments, treating life-threatening emergencies, trauma cases, burns, survivors of sexual violence and providing reproductive care. MSF also regularly responds to emergencies, such as the earthquakes in 2010 and 2021.

Trauma and Burns Hospital in Tabarre

The MSF hospital in Tabarre, a neighbourhood in Port-au-Prince, provides comprehensive medical care (emergency, surgery, burns, physiotherapy and psychological support) with a capacity of 70 beds, 20 of which are dedicated to survivors of burns.

The former burns centre in the Drouillard neighbourhood of Cité Soleil is now dedicated to the management of severe trauma cases, with emergency room, operating theatre and hospitalisation services. The site currently houses one of MSF's three cholera treatment centres (CTC) in Port-au-Prince with a capacity of 147 beds.

The MSF Emergency Centre in Turgeau, an area in Port-au-Prince, provides emergency medical care and refers patients to other health facilities after stabilisation. The paediatric section cares for children under the age of five who require hospitalisation. The site also houses a CTC with a capacity of 41 beds.

In the town of Carrefour, MSF is supporting the emergency room of the Raoul Pierre Louis hospital with the Martissant-Carrefour project. Fifty beds have been made available to treat cholera patients.

Sexual and reproductive health in Port-à-Piment

The Sexual and Reproductive Health (SRH) project aims to reduce maternal and infant mortality in southern Haiti. Basic emergency obstetric and neonatal care is offered at the Port-à-Piment maternity hospital, as well as support for SRH activities at health centres and referral hospitals in the region.

The project aims to address the sexual health needs of adolescents living in Artibonite department. It also provides recreational/educational activities for health promotion and family planning, preventive care and mobile clinics for the management of sexual diseases.

The Urban Violence Project is being implemented to provide basic healthcare, with referral options to secondary healthcare, to communities affected by urban violence. The project also aims to provide water, sanitation and hygiene support to people who are displaced in the Port-au-Prince area.

Sexual and Gender-based Violence in Port-au-Prince

The project was opened in 2015 by the Pran Men'm Clinic in the Delmas 33 area of Port-au-Prince and offers care for survivors of sexual violence, intimate partner violence and minors who have experienced sexual abuse. The package of services offered includes medical, psychological and social care.

Find out more about Haiti

2022: Pictures from a year of humanitarian response

Haiti: MSF calls for an urgent intensification of efforts to fight against the cholera outbreak