Asylum seekers and refugees have been held on Nauru and Papua New Guinea since July 2013, with still no end in sight. They have faced years of various forms of detention, uncertainty about the future and a lack of control over even the basic details of their lives. 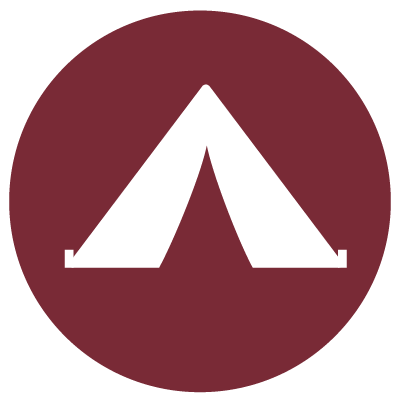 Refugees and displaced persons
More than 200 refugees and asylum seekers are being held on Nauru and Papua New Guinea under the Australian government's immigration policy. This current system causes severe psychological trauma, in addition to the atrocities many have already suffered. 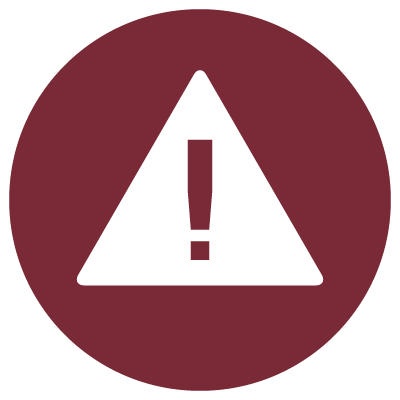 Neglected people groups
Adequate mental healthcare is largely unavailable to those on Nauru and Papua New Guinea, with overwhelming numbers of people having considered or attempted suicide.

We have been calling for an end to this harmful policy for years. Enough is enough.

There are still more than 200 refugees and asylum seekers held on Nauru and Papua New Guinea. It’s time to finally end this inhumane policy, and give these people the chance to settle in a safe country like Australia or New Zealand so they can begin rebuilding their lives.

We’re calling on the Australian Government to:

Ultimately, there is no therapeutic solution for asylum seekers and refugees until they are permanently and voluntarily resettled in a place of safety.

MSF staff during an outreach program on Nauru in January 2018. In October 2018, the Nauruan government forced the closure of MSF’s mental health activities on the island, advising that our services were “no longer required." © MSF

Under Australian Government policy, any asylum seeker arriving in Australia by boat is sent to offshore ‘processing centres’   on Papua New Guinea or Nauru.

Since 19 July 2013, the Australian Government has stated that even if these asylum seekers are recognised as refugees they are unable to be permanently resettled in Australia. This is despite the fact that seeking asylum is legal, whether by boat or other form of transport, under both Australian and international law. Between July 2013 and December 2014 more than 3,000 people have been sent to Nauru and Papua New Guinea under this policy.

Many refugees have since been resettled to third countries, mainly the USA. However more than 200 refugees and asylum seekers remain in limbo on Nauru and Papua New Guinea, with still no certainty about their future.

More than 1,000 more have been transferred to Australia, mostly for medical treatment, some of whom remain detained in places including hotels and immigration detention centres, or in community detention.

“Often I find myself wishing the boat had sunk…that I had drowned rather than endure these past seven years. I have so few choices, I feel I am in prison."

A patient on Nauru is cared for by an MSF mental health professional, prior to the closure of MSF's activities in 2018. © MSF

How has MSF supported refugees in Papua New Guinea and Nauru?

For 11 months from November 2017 until October 2018, MSF provided free psychological and psychiatric treatment on Nauru to refugees and asylum seekers, as well as to Nauruan nationals, under an official agreement with the Nauruan government.

Of 285 patients, 73% were refugees or asylum seekers and 22% were Nauruan nationals (the rest were foreign workers or had unknown status).

Of the refugee and asylum seeker patients, 193 (93%) were recognised refugees while 15 (7%) were asylum seekers.

In October 2018, the Nauruan government forced the closure of MSF’s mental health activities on the island, advising that our services were “no longer required”. In February 2019 the Nauruan government prohibited telemedicine in  Nauru, again preventing patients and their families from accessing our services.  This came after MSF had raised the alarm about the mental health crisis on the island, as described below.

In late 2017, MSF attempted to assess medical needs among refugees and asylum within the regional processing centre on Manus Island, Papua New Guinea. However, despite receiving official authorisation, the team was never granted access to the centre or nearby transit centres.

In December 2019, MSF commenced tele-mental health services for refugees and asylum seekers held in Port Moresby, who had been transferred from Manus Island. MSF psychologists and cultural mediators conducted over 140 tele-health counselling sessions for 18 patients over the three-month program, with activities concluding in March 2020.

The project aimed to prevent further mental health deterioration among asylum seekers and refugees after the repeal of the Medevac bill, which had given independent doctors more decision-making power on medical transfers to Australia.

As well as these mental health projects, MSF has also provided medical administrative support to assist with patient assessments for people seeking medical transfer. We have also continued to advocate to the Australian government that asylum seekers and refugees held on Nauru and PNG need to be permanently resettled because of the impact of indefinite ‘processing’ on their mental health.

Australia’s ‘offshore processing’ of asylum seekers and refugees is an undeniably harmful policy with devastating mental health impacts.  After providing mental healthcare to patients on Nauru and PNG, MSF is deeply concerned by the persistent, and in many cases deteriorating, levels of mental health distress.

MSF analysed our medical data from Nauru in a report called Indefinite Despair.

This analysis found that the mental health suffering on Nauru is among the worst MSF has ever seen, including in projects providing care for victims of torture. One of the key factors contributing to the mental health distress was the lengthy and indefinite time period of the ‘processing’: people simply had no idea how long they would be held offshore. Other factors included the lack of control that people felt over any aspect of their lives, the separation from family members and violence they had experienced in Nauru.

Our team also found that the local Nauruan health system was ill-equipped to manage the mental health crisis, with insufficient staffing and no inpatient facilities.

All the patients in Port Moresby that we supported through tele-mental health counselling met the criteria for depression and at least one other diagnosis. Ninety per cent of our patients had experienced suicidal thoughts, and 50 per cent had attempted suicide prior to the tele-health program.

“In offshore detention, for hundreds of people who were only seeking a peaceful life, a life free of persecution, there is no end," says Dr Sue Mitchell, mental health activity manager in Port Moresby's tele-mental health program. "I witnessed people become immobilised by depression and helplessness.”

The case histories of our patients revealed that their mental health had deteriorated from moderate to severe mental health disorders over the years of the policy. Many now had such poor psychological health that they were effectively incapable of engaging with the processes required to apply for resettlement.  Many also raised concerns about the quality of healthcare they were able to access in Port Moresby.

These poor mental health outcomes are tragically not surprising, as the effects of detention and family separation are well documented by mental health research. As long as refugees and asylum seekers remain in limbo, their mental health is likely to further deteriorate.

“In offshore detention, for hundreds of people who were only seeking a peaceful life, a life free of persecution, there is no end. I witnessed people become immobilised by depression and helplessness.”

How is the coronavirus pandemic affecting this group?

Papua New Guinea recorded a surge in coronavirus cases in early 2021, with several refugees infected. MSF is concerned about the inadequate access to testing and healthcare, particularly as the Australian government has a responsibility to ensure that asylum seekers and refugees held under their policy receive quality medical care.

Nauru has recorded no coronavirus cases to date.

The closure of international borders has also caused distress, particularly when resettlement options are already so restricted, although some resettlement has continued throughout the pandemic. Many are concerned about family members in countries with high case numbers, such as Iran. In addition, the lockdowns have been retraumatising as people recall the confinement in detention centres that they have experienced.

Some asylum seekers and refugees who have been medically evacuated to Australia are also concerned that their accommodation puts them more at risk during the pandemic. For example, some are detained in hotel accommodation where they are forced to share rooms and communal living spaces, making it impossible to comply with social distancing guidelines.

“I have no energy to think or make a decision. They make decisions for me, they think for me."

What needs to happen?

MSF has consistently called for an end to Australia’s harmful offshore processing policy and for permanent resettlement for all asylum seekers and refugees still held on Nauru and Papua New Guinea. While mental healthcare can help stabilise patients and relieve some symptoms, it won’t provide a ‘cure’ while the stressor of indefinite detention remains.

After so many years of suffering, enough is enough.

With the COVID-19 pandemic further limiting international resettlement options, and with the group of asylum seekers and refugees held offshore now numbering only around 200, it is time for the Australian Government to end their policy and:

How can I help?

While Médecins Sans Frontières is not currently permitted to provide treatment on Nauru, we are still providing assistance to thousands of other refugees and asylum seekers who have been displaced from their homes through conflict and disaster. Our staff provide essential healthcare and psychosocial support to refugees in countries like Syria, Ethiopia, and Bangladesh.

Can you help increase our capacity to assist refugees and displaced people around the world? 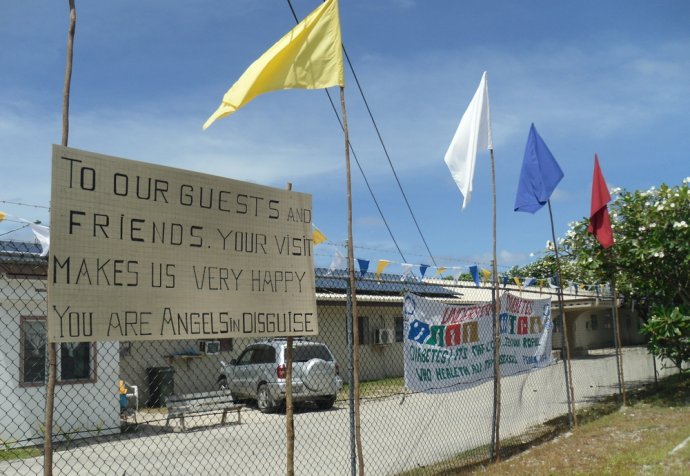 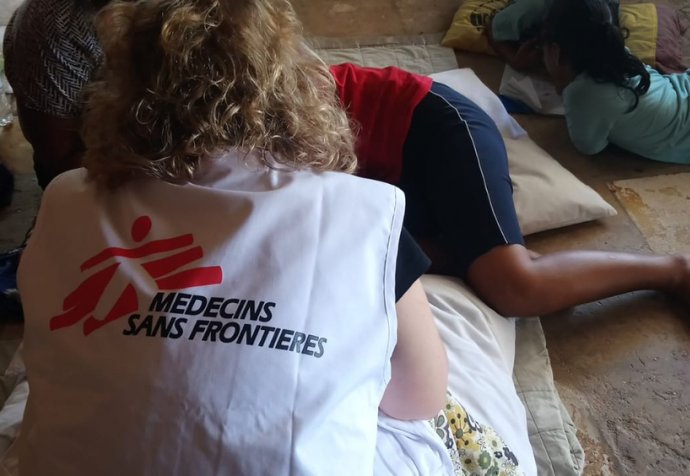