We are the main healthcare provider in Nduta refugee camp in Western Tanzania, which hosts over 73,000 Burundian refugees. Burundian refugees in Tanzania are the most underfunded refugee group in the world, according to the UN Refugee Agency, while Kigoma region, where Nduta is located, is one of the poorest regions in Tanzania. Consequently, both refugees and the host community are especially vulnerable to an outbreak.

Our preparedness efforts are focusing on strengthening systems, implementing new measures, and health promotion to sensitise and educate the community on hygiene and best health practices.

We have completed construction of triage and isolation areas at each of its four health clinics. People who are suspected to have been infected with COVID-19 will be referred to the MSF hospital where a central isolation centre is also being built. Currently we have 50-60 isolation beds available, with the ability to scale up to 100 if needed.

There is an urgent need for greater international support of the COVID-19 response in Tanzania, to increase the capacity to isolate and treat people with COVID-19, as well as reinforce testing across Kigoma.

Can you make a donation to support our COVID-19 response?

Right now, Médecins Sans Frontières is providing much needed support and medical care in over 30 countries to counter the COVID-19 pandemic.
Our teams are also gearing up to confront potential outbreaks in the hundreds of areas we were already working before the pandemic struck. We are deploying medical staff, sending supplies and applying nearly 50 years of experience fighting epidemics to protect the most vulnerable and save lives.
Can you help increase our capacity to respond by making a donation to our COVID-19 Crisis Appeal?

FIND OUT MORE ABOUT CORONAVIRUS COVID-19
Tanzania is home to two of the world's most renowned tourism destinations - Africa's highest mountain, Kilimanjaro, and wildlife-rich national parks such as the Serengeti.

Médecins Sans Frontières has worked in Tanzania since 1993. We have been providing healthcare to Burundian and Congolese refugees living in Kigoma Region, as well as to members of the Tanzanian host community since 2015. Our work in the country has focused on providing responses to endemic and epidemic diseases, social violence and healthcare exclusion.

Humanitarian organisations struggle to provide adequate assistance for the hundreds of thousands of refugees seeking shelter in the country. By the end of 2016 Tanzania was hosting over a quarter of a million Burundian and Congolese refugees crammed into three overstretched camps (Nyarugusu, Nduta and Mtendeli).

In January 2017, the Tanzanian government revoked the prima facie status of Burundian refugees, meaning that automatic refugee status was not granted to new arrivals in the country, and each person's refugee status must be determined individually.

Due to continuing unrest, people continued to pour across the border. This has put additional pressure on the already full and overstretched camps, all of which have long since exceeded their intended capacity. Humanitarian organisations working there have struggled to provide adequate shelter, water and sanitation.

Women and children search for water near the edge of the small Bururuma River that borders the Nduta refugee camp in Tanzania. Overcrowding and unhygienic communal shelters have exacerbated the spread of diseases - particularly malaria, gastrointestinal infections, skin diseases, and respiratory tract infections. © Erwan Rogard / MSF

To meet the increased demand for care, MSF expanded services across three camps. MSF has been involved in advocacy for the scaling up of assistance.

New arrivals come by bus, first crossing the border point, then entering transit camps. Many must queue for hours in the reception centre to receive their daily meals. Some refugees have already been allocated a shelter but have not received their refugee card and dry food rations. They must return every day to the reception centre to get a warm meal.

A lot of them arrive exhausted and in bad health condition. We do their medical check-up and send those in need to MSF clinics or refer them to the hospital. They also get vaccinated, and pregnant women are scheduled for antenatal consultations. When I [first arrived], there were around five deliveries per day. Now we have around 12.

MSF is the primary healthcare provider in Nduta camp, which has grown to double its intended capacity. Hospital services included maternal care, nutritional support, paediatric and adult inpatient departments, and an emergency room. Specialised outpatient services, such as treatment for HIV, malaria and tuberculosis, are also provided.

The spread of disease is exacerbated by overcrowded and unhygienic communal shelters. Despite comprehensive malaria prevention and control activities in the camp, including rapid access to diagnosis and treatment, the infection rate remains very high during the rainy season. MSF teams distribute mosquito nets in areas identified as being high-risk due to the concentration of mosquitoes and the incidence of malaria.

Diarrhoea, respiratory infections and skin diseases are also prevalent due to inadequate conditions. Potential outbreaks of cholera are also a concern, particularly during the rainy season. The vast majority of admissions to our health posts are children.

Protracted encampment and a general sense of insecurity in the camp, together with helplessness about what the future holds, contributes to growing mental health needs among the refugees.

MSF carries out mental health consultations for displaced people and the local population.

Following the 1994 Rwandan Genocide, nearly 2 million ethnic Hutus fled across the border into eastern DRC, as well as Tanzania and Burundi, where they settled in large refugee camps. Humanitarian access to the camps was severely limited, or outright denied; and refugees were subjected to targeted armed attacks by Rwandan and Burundian armies, as well as the AFDL (Alliance of Democratic Forces for the Liberation of Congo) forces.

MSF tried to provide aid to both refugees and local populations caught in the fighting. These teams came face to face with the AFDL’s and the Rwandan army’s bloody methods, which included using humanitarian organisations as a lure to draw refugees out of hiding.

In the years since the atrocity, MSF released a detailed case study, highlighting the dilemmas that emerge from humanitarian involvement in conflict situations. The report outlines the decision for MSF staff to speak out.

Find out more about Tanzania 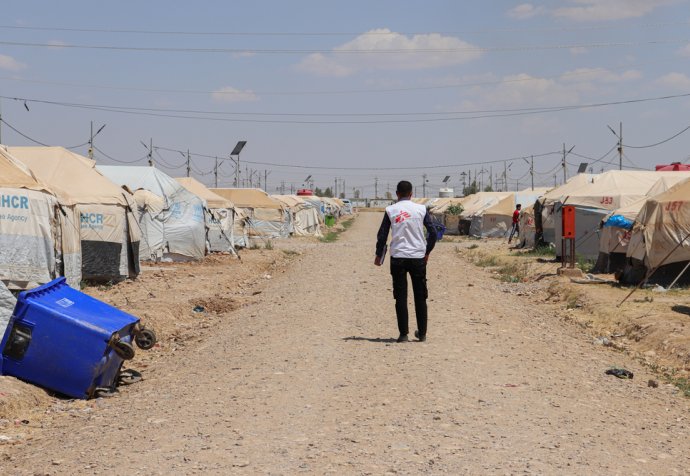 How is the coronavirus pandemic affecting refugees?

Tanzania: Part 2 – “Malaria traps people in an unfair cycle of suffering and illness”

Tanzania: Part 1 – “My first week in the camp was a whirlwind of emotions”