The impact of human-induced climate change and environmental degradation on health is evident in many places where MSF provides medical care around the world. Climate and environmental changes directly affect human health through injury, malnutrition, changing disease transmission patterns, dengue and diarrheal diseases, and respiratory and cardiovascular illness.

Climate change has been described as the biggest global health threat of the 21st century, while the response to climate change provides the greatest opportunity to protect health. The scientific evidence for climate change is unequivocal, and the magnitude of the consequences can no longer be ignored. Evidence clearly shows that we will be seeing further rising temperatures and sea levels, and more frequent and intense extreme weather events such as heavy rains, heat waves, cyclones, droughts and floods.

Some regions are more vulnerable to climate change, such as South Asia and the Pacific region, the Middle East, the Sahelian Belt, Southern Africa and Central America. In Australia, we have already witnessed an unprecedented drought and bushfires that scientists have linked to climate change.

CLIMATE AND HEALTH IN CHAD: A CASE STUDY

Why planetary health is critical

The health impacts of the climate emergency are already a burden for many people in the world. Unless urgent action is taken to reduce greenhouse gas emissions the impacts will be disastrous. Médecins Sans Frontiéres (MSF) is alarmed about the consequences of the climate emergency on human health. As a medical humanitarian organisation we are already responding to situations exacerbated by a changing climate like increasing infectious diseases, droughts and cyclones. We are also concerned about the potential for climate change to increasingly lead to disputes over water and other resources, social exclusion, and migration crises, all of which heighten the risk of conflict.

MSF is increasingly applying a planetary health lens to our humanitarian response, which means looking at how the environment is shaping the health of our patients, from acute climate-related events to downstream impacts such as displacement, conflict and food insecurity. Planetary health is the health of human civilisation and the state of the natural systems on which it depends. Our health depends upon the wellbeing of the planet, and the wellbeing of the planet depends on how we act.

The medical impacts of the climate emergency

MSF works in some of the most climate-vulnerable settings in the world where people already lack access to basic healthcare. These people are also the least responsible for the emissions that generate the climate crisis – and yet they are bearing the brunt of its effects.

In many MSF project locations, our medical humanitarian teams are responding to situations that are linked to the changing environment. This includes increasing numbers of people with infectious diseases such as malaria, dengue fever and cholera, as a result of changing rainfall and temperature patterns. There are also increasing cases of zoonotic diseases (transmitted from animals to humans) due to rising pressure on the environment; and more frequent extreme weather events, such as cyclones, hurricanes and droughts, which can contribute to malnutrition. In many places where we work today, our teams see people with multiple health needs resulting from frequent epidemics, food insecurity, conflict and displacement, which are all exacerbated by the climate emergency.

Drought poses multiple risks for health, threatening drinking water supplies, sanitation, and crop and livestock productivity, and enhancing the risk of wildfires. Consequently, droughts increase food insecurity and malnutrition, which can lead to stunting, wasting and death in children. Current models predict that climate change will severely exacerbate water scarcity throughout the world. In 2021 The United Nations announced that Madagascar was on the brink of experiencing the world’s first climate change famine. Three consecutive years of drought severely affected harvests and access to food in the southern, desert regions of Madagascar. It also exacerbated the annual ‘lean season’ resulting in an acute food and nutritional crisis. In response, MSF launched a medico-nutritional program to screen and treat communities for acute malnutrition.

According to the Lancet Countdown on Climate and Health 2020, climate change had a role to play in 76 floods, droughts, storms and temperature spikes between 2015 and 2020. In 2019 MSF launched a massive emergency operation in Mozambique following the devastating floods caused by Cyclone Idai. A few weeks later, with people still reeling from the disaster, a second cyclone struck the country. It was the first time in recorded history that two cyclones hit Mozambique in a single season. The scale of the damage caused by these back-to-back disasters was a wake-up call to prepare for more high-impact tropical cyclones, coastal flooding, and intense rainfall linked to climate change, according to the World Meteorological Organization, a UN agency.

Warmer temperatures, such as those associated with climate change, have been shown to increase the incidence of water and food-borne diseases such as hepatitis, viral gastroenteritis and cholera. Climate change has also been linked to the spread of infectious disease vectors including mosquitoes and ticks, leading to likely increases in malaria, dengue fever, and Lyme disease. In 2018, Honduras, considered a climate change hotspot, battled its worst outbreak of dengue fever in 50 years following a prolonged rainy season.

MSF treated more than 5,000 patients, mainly children under the age of 15 living in poor urban areas, during the dengue epidemic. Severe dengue affects most Latin American and Asian countries and is a leading cause of hospitalisation and death in these regions. The incidence of dengue has grown dramatically in recent decades partly due to warming temperatures and the associated spread of the mosquito species that carry and spread the disease. The WHO estimates about half of the world’s population is now at risk, with an estimated 100-400 million infections each year.

Our teams have observed spikes in malaria cases in several sub-Saharan countries compared to long-term averages and the evidence suggests that the incidence and prevalence of malaria will increase, particularly in Africa. MSF is very concerned that we are now seeing malaria cases in regions where mosquitoes were previously not present, such as the Ethiopian highlands.

Climate change is increasingly influencing human mobility as more places become uninhabitable. Millions of people are currently on the move and the conditions that create such displacement will likely be exacerbated by climate change. Most climate-related migration is expected to occur within national borders and towards urban areas, where people may face the challenge of living in overcrowded, unsanitary, urban slums. Two and a half billion people are expected to be added to urban environments by 2050, with 90 per cent of this increase occurring in Asia and Africa. Regions experiencing strong climate shocks are often home to densely populated, impoverished communities. These ‘hotspots’ include large river deltas in South Asia, semi-arid regions in Africa and the Middle East, glacier and river basins in Central Asia, low-lying islands and coastal regions vulnerable to sea level rise, and areas increasingly affected by extreme weather events including Central America, the Caribbean and the Pacific. MSF has large scale operations in several such climate ‘hotspots’ and continuously responds to population displacement caused by storms, floods and droughts, including in Haiti, Bangladesh, Nigeria, Somalia and Yemen.

The food hunger season, which usually ends in April, is becoming more critical each year in the desert regions of southern Madagascar. Three consecutive years of drought have severely affected harvests and access to food, in a context now marked by the Covid-19 pandemic, which has led to a drop in seasonal employment and other sources of income. Madagascar, March 2021. © Ainga Razafy/MSF

How will the climate crisis change the way we work?

We will adapt the way we work to ensure a timelier, more efficient and better-tailored response to climate driven public health crises adding climate change effects as triggers for intervention. As the needs change, so will our medical action. We will bear witness to climate related impacts and injustices and step up our research and analysis to inform our work.

“MSF teams are medical humanitarians, not climate scientists —but after years of witnessing how climate change has likely exacerbated health and humanitarian crises in multiple contexts where we work, we are compelled to speak out about what we see."

What climate-related actions is MSF taking?

We recognise that as a large, international organisation we have an important role to play in reducing our impact on the climate. We are progressively adapting the way we work to ensure we are environmentally responsible and that our activities don’t cause harm to the people we are trying to assist. We have developed a toolkit to measure and mitigate our environmental footprint, including carbon emissions, other greenhouse gases and other elements that contribute to environmental degradation so that we can change our practices.

The first annual Climate Emergency Report describes the commitments and progress of MSF Australia in reducing our own carbon emissions footprint and in supporting MSF-wide climate crisis mitigation and adaptation goals and activities.

Building on MSF’s 2020 Environmental Pact, we recognise the need to make real and immediate changes in order to help curb the health impacts of climate change. This is why we are pledging to drastically reduce our emissions in this decade and why we are joining the nearly 200 humanitarian organisations who have signed the Climate and Environment Charter for Humanitarian Organizations. As an emergency medical organisation, our priority will always be to provide rapid assistance to people in some of the world’s most remote places, but we must find a way to do this while minimising our environmental footprint. Within MSF, across the humanitarian sector and in the whole of society, we must change how we operate. This will not be easy, but will only become more necessary as climate change increasingly exacerbates humanitarian emergencies.

“Decarbonising the way we implement and support our medical emergency projects in over 70 countries is not a small task. But we are determined to get there and we are working from all angles to find solutions,” says Christou. “If we want to spare future generations from more suffering and disasters, we all need to take responsibility. The climate crisis is ultimately a health crisis and curbing emissions is now part of our humanitarian action.”

The Lancet Countdown: Tracking Progress on Health and Climate Change is a collaboration of over 120 leading experts bringing together climate scientists, engineers, energy specialists, economists, political scientists, public health professionals and doctors. Each year its findings are published in the Lancet ahead of the UN climate change negotiations. MSF has been contributing a policy brief to the Lancet Countdown for a number of years. In the 2021 brief MSF’s teams around the world and across multiple disciplines share their experiences with how climate change has likely exacerbated health and humanitarian crises and how they have adapted or plan to adapt their response.

While MSF is not an environmental organisation, we increasingly recognise that the health of our patients is intricately linked to the health of their environment. Now is the time to act—collectively. This emergency cannot wait.

MSF Australia is grateful to Pangolin Associates for their pro-bono support in conducting our annual audits and advising us on ways to reduce our carbon emissions footprint. 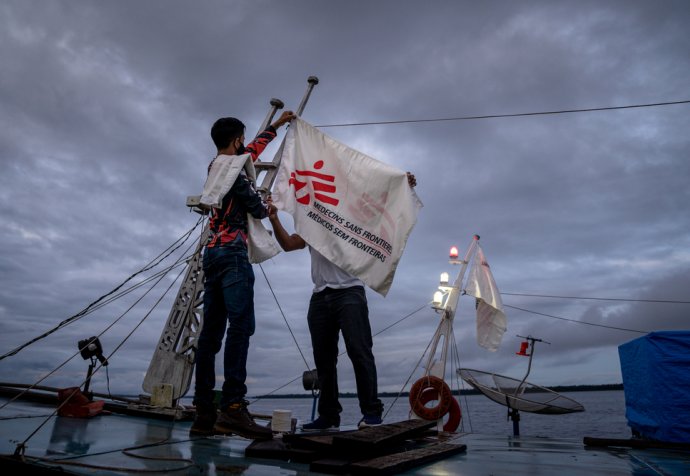 COP26: The climate crisis is a health crisis 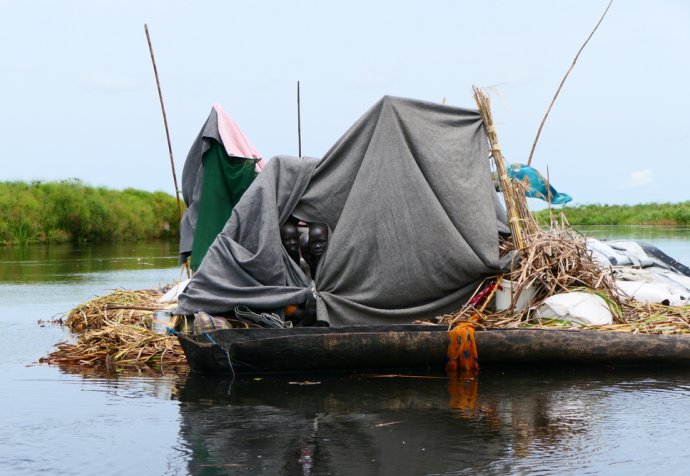 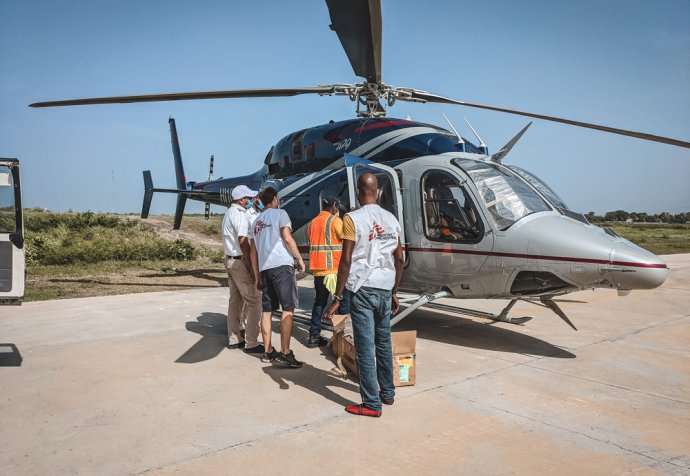 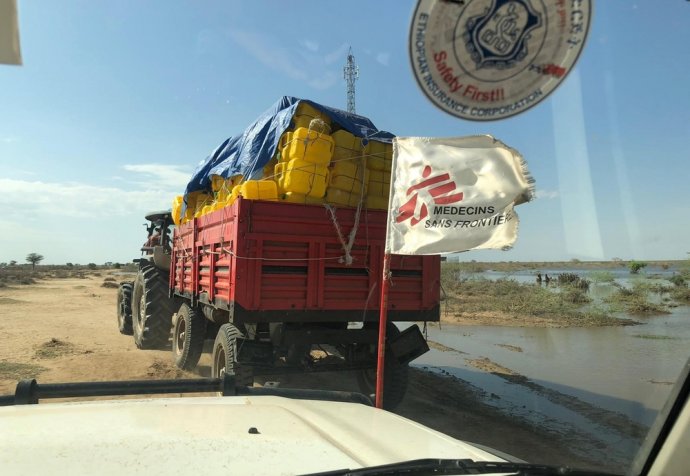 "Only Water": Flooding across east Africa