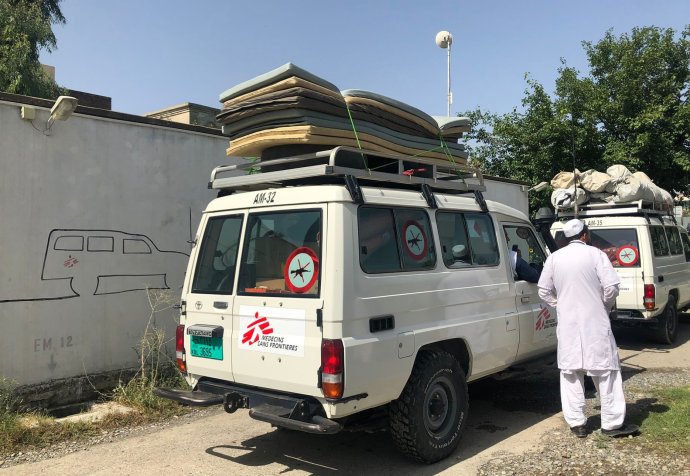 Responding to the Afghanistan earthquake 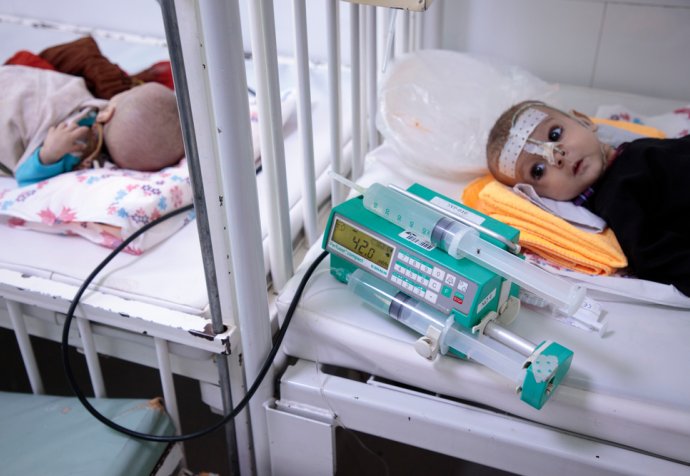 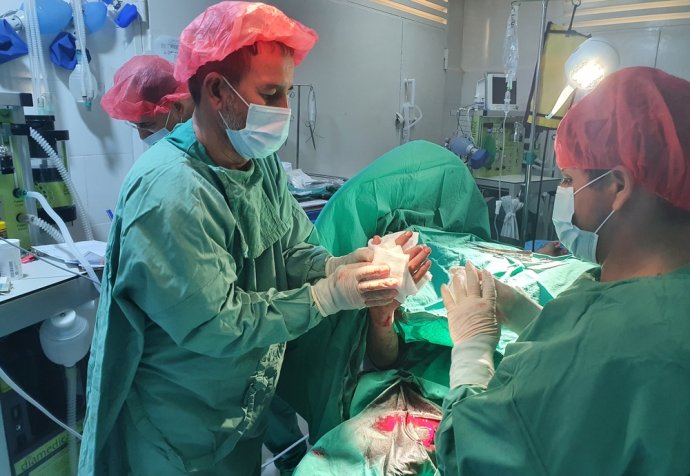 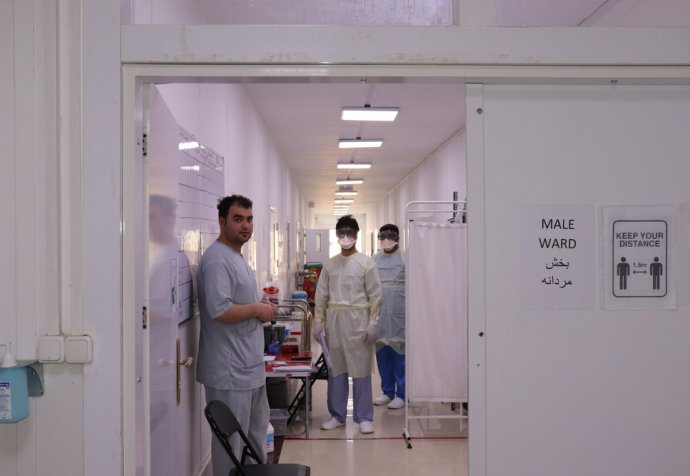 Afghanistan: “Treating patients is our responsibility."

After decades of conflict and chronic instability, more than five million people in Afghanistan have been internally displaced, with poor infrastructure and a damaged economy forcing many to rely on humanitarian aid.

Médecins Sans Frontières has been working in Afghanistan since 1980, providing emergency surgical care, responding to conflict and natural disasters, and treating people cut off from healthcare. MSF focuses on emergency, paediatric, and maternal healthcare in Afghanistan, which has one of the highest maternal mortality rates in the world.

By providing free, high quality maternal and neonatal healthcare in hospitals in Kabul, Helmand and Khost provinces, we aim to help reduce death and sickness in mothers and newborns. Training medical staff is an integral and important part of our projects.

Major attacks on our staff and hospitals have occurred in recent years; in October 2015, US airstrikes destroyed our trauma centre in Kunduz, killing 42 people, including 14 MSF staff. An armed group attacked our maternity wing at Dasht-e-Barchi hospital in Kabul in May 2020, with 16 mothers and an MSF midwife among those killed. In the wake of the attack, we made the difficult decision to withdraw from the hospital in Kabul, leaving women in the area without critically-needed emergency obstetric care.

A medic in MSF's Kunduz Emergency Trauma Unit examines the x-ray of a patient who has suffered a complicated fracture due to a bomb blast. August 2021. © Stig Walravens/MSF

The public healthcare system in Afghanistan is dysfunctional, and has been under-resourced, under-staffed and under-funded for years – well before the Islamic Emirate of Afghanistan (IEA) came to power in 2021. Patients often struggle to access even basic and preventive health services, meaning their health problems deteriorate and require more advanced medical treatment. Donor funding is keeping the healthcare system afloat, but it is not a long-term solution. The people of Afghanistan urgently need a health system that meets their needs.

The ripple effect of pre-existing sanctions and the additional financial measures taken against the IEA government are being felt nationwide. The economy has been crushed, leaving millions of people out of work and struggling to find employment. Food prices have soared across the country. Those people with jobs are supporting more family members, and many people do not have enough to eat or are delaying seeking healthcare as they cannot afford it.

Our activities in Afghanistan

Médecins Sans Frontières (MSF) staff continue to treat high numbers of patients for a wide range of health conditions. In September, we assisted over 3,758 deliveries, admitted 905 severely malnourished children to our facilities, and provided ambulatory nutrition treatment to 989 children, pregnant women or women who had recently given birth. And while our main focus continues to be on providing secondary healthcare, we also see a significant influx of patients in our outpatient departments. For example our project in Lashkar Gar triaged 23,591 patients in the Emergency Room in September - the highest number of any recorded month this year.

MSF's Dasht-e-Barchi maternity ward in West Kabul, which was closed after the heinous attack on mothers and midwives in May 2020. © Sandra Calligaro

In Kandahar, our teams have provided 12,750 consultations to patients for drug-sensitive and drug-resistant tuberculosis so far this year, with 1,522 in September alone. These numbers represent a considerable increase when compared to the same time period last year, when we provided a little over 7,000 consultations. This spike is largely caused by the improved security situation in the country and people’s ability to move more freely and seek healthcare. However, MSF’s financial support launched at the beginning of 2022 to provincial laboratories that offer TB testing likely plays a role as well.

During September, 488 patients were enrolled in the ATFC, and 110 children were admitted to the ITFC; this represents 25,8 per cent of all admitted patients to the ITFC this year. This increase correlates with more cases of acute watery diarrhoea in the region – something that has likely been brought about by increasing prices of basic food items. In short: people's nutritional status deteriorates because they don’t have enough money for food. This causes acute watery diarrhoea, which in turn worsens the malnutrition.

The MSF-supported Boost Hospital in Lashkar Gah currently operates with a 340-bed capacity and staff continue to be extremely busy in all departments. In September, we triaged 23,591 patients in the Emergency Room – the highest number of any recorded month yet this year. This spike can be attributed mainly to the fact that many other regional facilities were forced to shut down in recent months due to lack of medical supplies and personnel caused by insufficient funding. Also, colder September weather means more people need primary healthcare for respiratory infections etc. Out of those triaged, 2,948 patients were admitted for inpatient care.

There were 348 severe and acutely malnourished children admitted to the ITFC in September, with high prices of food and increased prevalence of acute watery diarrhoea likely causing the high number.

Our teams also treated 308 measles patients in September, assisted 1,963 deliveries in the maternity department and provided 1,531 antenatal and 994 postnatal care consultations. The surgical department carried out over 651 major surgeries (operations that require general or spinal anaesthetic).

MSF’s 61-bed Kunduz Trauma Centre has an Emergency Room, Intensive Care Unit, Inpatient and Outpatient departments and three operating theatres. The main reason for admission is trauma due to accidents, but the MSF team also provides care to people injured in explosions and from other forms violence. In September, 1,645 patients were admitted to the Emergency Room (178 less than in August, which was the busiest month on record so far this year) and 1,388 outpatient consultations took place; 168 patients were admitted for inpatient treatment; and 259 surgical procedures were carried out by our medical teams.

The construction of a new operating theatre dedicated to performing specialised internal fixations finished in August. Internal fixation is the insertion of a surgical implant that holds bones in position while they heal from fractures. Normally this procedure contributes to a shorter hospital stay for patients and allows faster physical rehabilitation. So far, we have had 23 patients requiring internal fixation.
In August, we stopped supporting the Kunduz Regional Hospital’s (KRH) measles ward because the number of measles had dropped to a point that is manageable by the KRH.

The MSF Inpatient Therapeutic Feeding Centre (ITFC) at Herat Regional Hospital (HRH) treats severely malnourished children who have an additional medical complication. In September, we admitted 375 patients, 136 of whom were under six months old. This represents just a slight decrease in our ITFC activity compared to August (401 patients admitted, 175 under six months old). This continuously high incidence of cases is related to more instances of acute watery diarrhea. It is also worth noting that while last year we admitted on average about 50 patients per week during September, this year we admitted more than 90 patients.   In the Ambulatory Therapeutic Feeding Centre (ATFC), we treated 63 patients in September.
MSF has also been working in the paediatric department of the HRH, supporting its Emergency Room (ER), Intensive Care Unit (ICU) and step-down unit (part of the inpatient department that provides care to patients who don’t require as regular monitoring as in an ICU but are not yet considered stable enough for normal care). In September, MSF medical staff triaged 18,730 children in the HRH’s paediatric department. More than 80 per cent of these were green (less severe) cases not requiring treatment in the ER. There were 358 patients admitted to the paediatric ICU, with the most common causes of admission being septic shock or severe sepsis, hypovolemic shock and respiratory failure.

At the Kahdestan clinic, we provide outpatient treatment for children and for pregnant and lactating women. In September, MSF carried out over 5,440 screenings in triage for malnutrition, antenatal and postnatal care, and for non-communicable diseases (just adults).

The COVID-19 Treatment Centre in Gazer Gah was handed over to the Ministry of Public Health in June, while our support to the 60-bed measles ward in HRH ceased in August.

Between February 2022 and July 2022, MSF undertook renovation work on the paediatric department of the Ministry of Higher Education Maiwand Teaching Hospital, and on 24 July 2022 established a new 34-bed Inpatient Therapeutic Feeding Centre (ITFC) there. During the month of September, we admitted 72 patients with severe acute malnutrition and treated 173 patients in the Ambulatory Treatment Feeding Centre (ATFC)

In February 2022, MSF opened a 28-bed measles ward at the same hospital. The ward has six high dependency unit beds where we treat the most critical patients. Over the course of September, we admitted 92 measles patients for treatment.

Khost Maternity Hospital (KMH) provides maternal healthcare to pregnant women experiencing complications, as well as neonatal care. In September, we admitted 1,775 pregnant women, supported 1,523 deliveries  and 153 patients were admitted to the neonatal ward.
In September, we screened 1,770 pregnant women for malnutrition, of whom over 15 per cent presented with moderate acute malnutrition (MAM) and fewer than 1 per cent with severe acute malnutrition (SAM). These women received treatment in KMH as well.
In addition, MSF teams supported 272 deliveries in eight regional comprehensive health centres.

Find out more about Afghanistan

Responding to the Afghanistan earthquake

Afghanistan: “Treating patients is our responsibility."